The Cove Football Clubs Women’s division was introduced to the Club in 2018.  The inaugural women’s team entered the SFL competition playing 12 a-side Football on a modified oval.  In 2019 the competition grew to 16 a side on a full-size oval and in 2019 became an 18 a side competition.

The A-grade women played an undefeated season in 2018 winning the premiership.  Then in 2019 going back to back with another premiership.

Senior Women train Every Monday and Wednesday at 6:30pm.  Games are played on Sundays. 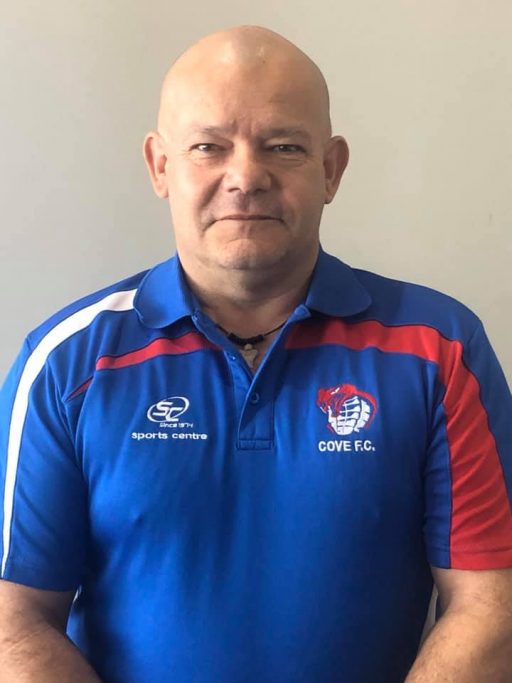 Tyrone started his junior football at Pooraka Football club playing under 9’s to Under 14’s. He played his Under 15’s at Parahills before heading back to Pooraka for Under 17.5’s. In his senior career, he played from 1993 to 2004 at The Noarlunga Football Club.

His coaching career began in 2002. Tyronne has extensive experience coaching at Noarlunga, Port Noarlunga, Christie’s Beach, Lonsdale/O’Sullivans Beach, and Mitchell Park. His main experience is in Under 18s but has coached from B grade to under 8’s and believes in a one-club motto of getting involved across all grades.

After being the Assistant Coach of the 2018 Women’s SFL Association side Tyrone has developed a passion for coaching women’s football and The Cove Football Club.

Tyrone has extensive Coaching accreditations including:

Tyrone has had many mentors across his coaching career. He has gained a lot of knowledge from these people and contributes his coaching to what he has learnt from their influences.
Barry Philmore
Trevor Mitton
Norm Bergman
Fabian Francis
Peter Galbraith
Nick Manhood

Tyrone is looking forward to working with The Cove Football Club to implement a structured women’s football operation.